Every few years another book comes out and even some movies that cast doubt on Patton’s death as to weather it was an accident or if he was murdered. I do not believe he was murdered. But I did think it important to update the web site. There is more to come as you will gleam if you read in between the lines.

There has been quite a bit of controversy on just how Patton died. Because Beatrice did not want an autopsy, one was not done. Recently on Brad Metzer’s Decoded series, on the History Channel, they interviewed the ranking doctor in the US Army Hospital in Heidelberg, Germany, a Colonel, who read  from Patton’s medical records. He explained that at no time was Patton ever alone. He further explained that there was no chance of a conspiracy to take Patton’s life from inside the hospital.

He further explained that his injuries eventually caused him to pass away. Helen Patton, one of General Patton’s grand children, challenged them to investigate it fully. I know her, by the way. She is a very nice lady and now lives in Germany. Recently, I contacted the renown Dr. Richard L. Rovit, MD, M.Sc.,Department of Neurosurgery, Munger Pavilion, Third Floor, New York Medical College, Valhalla, New York who is now retired. He has graciously given his permission to place his article “Patton, Death of a Soldier,” on this web site. It was originally published in the prestigious “Journal of Neurosurgery, Volume 108, February 2008, pages 402 to 408. Dr. Rovit wrote me back and stated, “Many thanks for your interest. The X-rays look authentic. There appears to be a small chip fracture on the anterior inferior body of C3 and some posterior dislocation of C4 on C5. However I will want to check these with a radiologist to be absolutely sure.. If we are certain they are authentic I will have to give some thought to writing the JNS to see whether they would have any interest to updating my Patton article with the new radiographs. You have my permission and thanks for including my article on your website.”    RLR

If you read in between the lines, you may have gathered that I am in procession of what may be a copy of Patton’s X-rays. If they prove to be real, I will place a copy of them on this page.

If you read the article in full you will see that there was not an elevator in the hospital. Remember it was built as German Army Cavalry Barracks. The German soldiers were supposed to be physically fit so running up and down stairs was a form of good exercise. They may even have been required to do so. When the German barracks was converted to a hospital, all the medical equipment had to be hand carried by the medical personnel. General Patton was very fragile and could not be moved. So the massive X-ray machine was hand carried down stairs so General Patton’s condition could be better evaluated.

I found two images from an army training manual of the period that are posted here of the massive X-ray machine so you can get an idea as to how large and cumbersome they were. 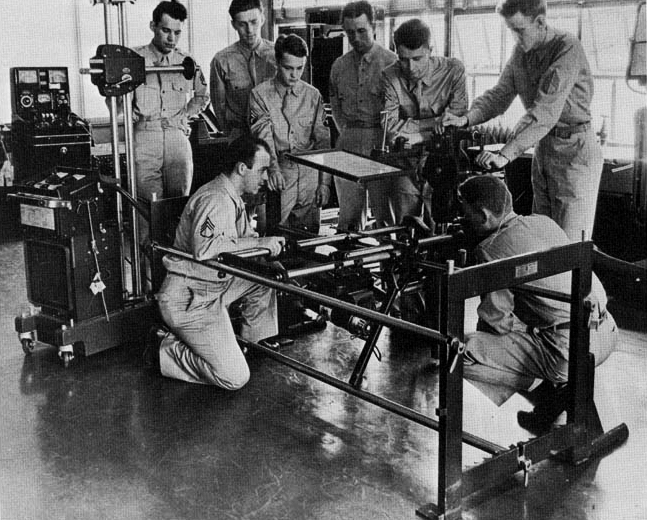 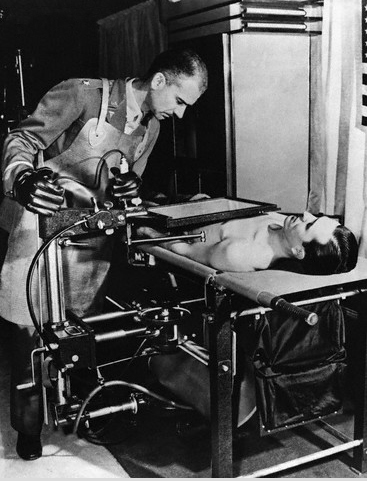