Patton loved dogs and owned quite a few in his lifetime. One of his early favorites was an English Bull Terrier named Tank. No known images of “Tank” have surfaced but who knows, maybe someday one will.

When Patton arrived in England in the spring of 1944, he longed for the personal companionship of a dog. Logic seemed to dictate that a proper breed English Bull Terrier could be found in England. He communicated his wish to Lady Leese, who was the wife of a British general who was serving in the Mediterranean theater at the time. Kay Summersby, who was General Eisenhower’s driver, joined her in the search for a dog, along with Aide De Camp Al Stiller.

They located an English Bull Terrier that needed a home desperately. He had been the loving companion of an R. A. F. (British Royal Air Force) Officer who was flying night bombings over Germany. He reportedly loved to take the little pup up with him on bombing raids. For some reason, he did not take his little dog, “Punch” up with him on a flight one night. He never returned. The dog was left an orphan. 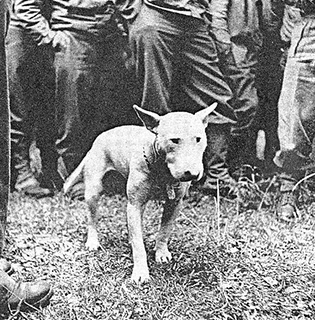 The fateful day came and on March 4, 1944, the little pup was purchased and on March 5, 1944, united with his new master General Patton. They took to each other immediately.

Patton named him Willie, but not after “William the Conqueror” as the movie “Patton’ suggested. His true name was Willie Whiffle and named after a young boy he had met during the depression who ate his fill for the first time at a BBQ Patton was hosting. He so remembered the young boy’s delight at being full, it stuck in his mind all of those years. Patton looked down at the malnourished dog, thought of Willie Whiffle, and named him Willie. He was going to fatten him up and the little pup would never go hungry again, just as the little boy had said some many years before that he was now “as full as a tick.”

Willie went for long walks with Patton and they were seldom separated in England. Willie and Patton loved each other. This continued through out the war.  Patton would almost always be followed by Willie. Sometimes, Willie would enter a room before Patton and all the soldiers in the room knew Patton would follow him in shortly.

Willie was soon to be fattened up as Patton loved him so much, he even ate at dinner with Willie sitting by his chair under the table. He would gradually bring him to the weight his little friend should be.  This image was taken early and Willie did not yet have many meals from Patton and his mess kitchen.

Willie would travel with Patton where ever he went during the war and got in quite a bit of trouble. English Bull Terriers have a fun loving personality. They love to play. Willie once grabbed Patton’s pistol belt, Patton had left in a chair, and ran down the hall with Patton chasing after him.

When Patton was traveling through Europe, fighting the war and sleeping in his mobile van, Willie would sleep there with him. Willie was known to snore.  He had a set of wooded slats placed over metal mesh on the steps leading up to the entrance of the mobile van, so Willie would not injure his claws and he ran up and down the stairs.

The movie “Patton” portrays Willie as a cowardly dog. Nothing could be further from the truth. In the movie, a small dog barked at Willie and he cowed down. The incident in the movie never happened.  Willie wasn’t even there at Knutsford. If he had been, he would have engaged the dog if it had been aggressive, and it would have been no match for him. 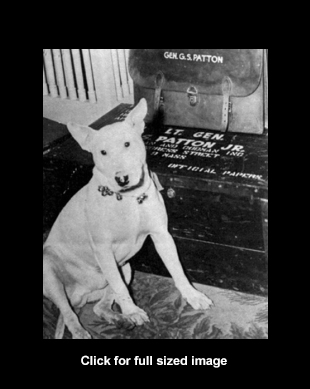 Willie gets into a dog fight.

In Nancy, when General Eisenhower visited Patton headquarters, he brought his little dog, Telek, which was a small black Scottie dog. They where dining at lunch together and both Telek and Willie got in a fight under the dinner table.

Kay Summersby wrote of it, she said, “Suddenly, war broke out at our feet. Willie had wandered inside and found a little black Scottie in the private, holy domain at Patton’s feet. He attacked with typical Patton fury. Telek fought back with all the canny courage of his Scots ancestors. The noise was straight from the jungle, loud and wild and deadly.

General Patton let loose with every curse in his celebrated vocabulary. It was classic, that tirade, but I was too frightened to hear it. I was terrified for Telek.”

It took four generals, the theatre’s top Brass Hats-to separate Willie and Telek. Even then they had to throw water on the fighters.

“This is Willie’s home,” General Ike maintained. “We should lock up Telek.”

Then he shouted, “But my Willie was chewing the bejesus out of your gawdamned little Scottie-rank or no rank.“

Willie was Patton’s constant companion and survived the war. Col. Codman was sent to bring the General belongings back to the family after Patton’s Death. Willie lived on for almost 12 years and quietly passed away at the family farm, where he is buried in an unmarked grave.

English Bull Terriers are wonderful dogs. Loving, caring and protective. They do have special needs and should be owned by responsible owners who are willing to learn about the breed and how they should be cared for.

Here is a little information about the breed :

They are described thus, : Though this breed was once a fierce gladiator, he is much gentler now. A Bull Terrier might have a preventive effect and it might defend its owner in a truly critical situation, but it isn’t bred to be a guard dog.

Courageous, scrappy, fun-loving, active, clownish and fearless. The Bull Terrier is a loyal, polite, and obedient dog. They become very attached to their owners. The Bull Terrier thrives on firm, consistent leadership and affection and makes a fine family pet.

Bull Terriers like to be doing something and fit in well with active families where they receive a great deal of companionship and supervision. They do not do well in situations where they are left alone for 8 hours a day. With the right type of owner this breed is a joy to own, but not recommended for most households.

Fond of both grown-ups and children, but if they do not get enough physical and mental exercise they may be too energetic for small children. Meek owners will find them to become very protective, willful, possessive and or jealous. Bull Terriers may try to join into family rough housing or quarrel. They need very firm training and lots of exercise. Bull Terriers must be given a lot of structure, or they may become destructive. Be sure to socialize them well and remain their pack leader 100% of the time, otherwise, they can be extremely aggressive with other dogs.

Unaltered males may not get along with other male dogs. They are not recommended with other non-canine pets such as rabbits, hamsters and guinea pigs. They make excellent watch dogs. This breed can be somewhat difficult to train.

Standard Bull Terrier
Height: 20-24 inches (51-61 cm.) Weight: 45-80 pounds (20-36 kg.) They crossed the Bulldog with the Old English Terrier adding in some Spanish Pointer blood, the result was the Bull Terrier breed. They soon found that the Bull Terriers were not the most successful fighters. In 1860 the white-coated variety, which was nicknamed the “White Cavalier” was bred by a dog dealer named English dog dealer James Hinks and soon became a fashionable pet for nobles.

Patton’s Willie was an “White Cavalier.”