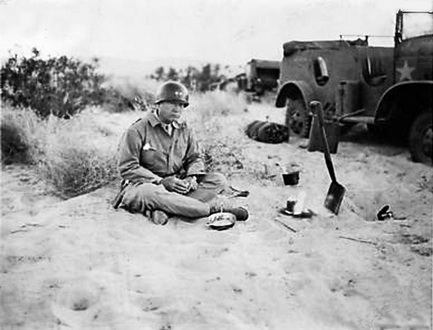 General Patton was fond of the Dodge Command Cars and used a 1/2 ton Command Reconnaissance Car in the dessert training in 1942 before going overseas in November 1942. The 1/2 ton Dodge command car had a flaw in the design as all of the WC 1/2 ton did. They sat too high off the ground and when traversing a sloop at an angle they could and did roll over. This caused the design of the Dodge 3/4 series. They were wider and sat lower to the ground and made for a more sturdier platform for the different models. 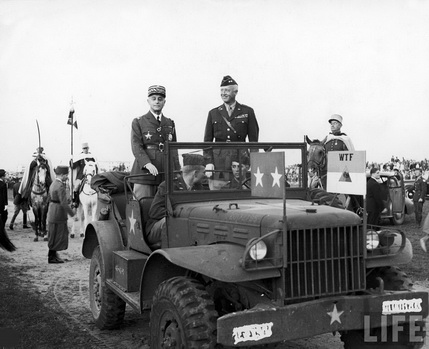 As soon as one was available, General Patton had the new WC 56 3/4 ton command car assigned to him. Pictured, taken by Life magazine, orginally taken by the Army Signal Corps shows Patton with a french general after hostilities ended in North Africa.. The distinctive flags were now made of metal. The WTF on the drivers side flag stood for Western Task Force. War time censors obliterated the unit makes on the photograph so the exact unit could not be read on the front bumper. 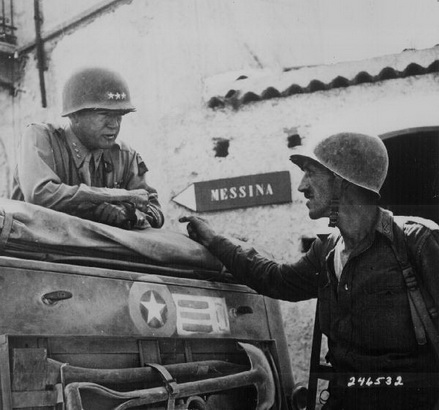 Patton’s WC 56 Dodge command car and was seen in it in Sicily in 1943. The command car was roomy by 1943 standards and was suitable to carry both radios and long arms with room to carry passengers. It’s major drawback was the silhouette it provided from the air and made an identifiable target for enemy plans. The enemy understood that General officers and radio equipped recon units were the ones primarily assigned to them.

Needless to say, they were a target priority. This did not deter General Patton and despite the apparent risk, when other General were opting for the Jeep, Patton went ahead and had a Dodge WC 57 modified to his specifications in 1944 in England. 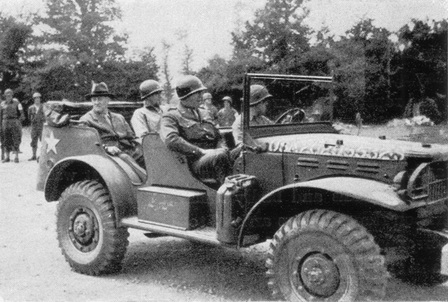 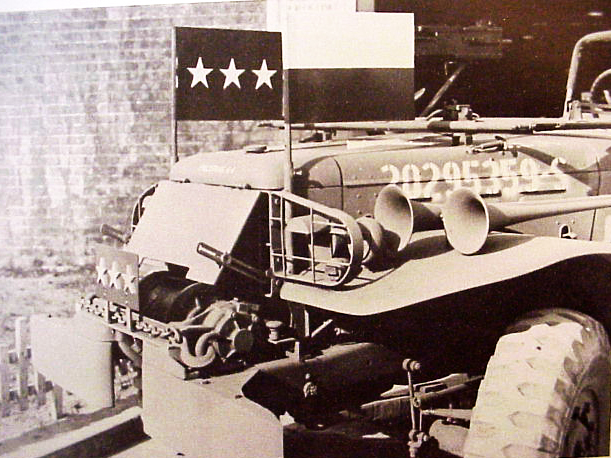 Because the modification were unique and because General Patton was well, General Patton, the Army Signal Corps took a series of photographs as it was being modified in England.The Dodge WC 57 is a ¾ ton Dodge Command and reconnaissance car and came from the factory with a winch and a radio switch box located behind the front seat, passenger side. It operates on a 12 volt electrical system. The first modification was the addition of an armor plate that would swivel up or down to protect the radiator and deflect ground fire from penetrating the radiator. It worked off the helmet principal in that by being sloped it could divert shrapnel and small arms fire away from the radiator. Patton had been in the thick of it and often had shells exploding near him. He thought this would help. Intelligence reports and area photographs of Europe showed that it was heavily mined in places. Since Patton believed the commanding General should not only be heard but identified as such as “the” commanding General of Third Army, he placed two large metal flags on the front grill of all his vehicles.

The rear of the command car’s floor board was plated with ½ inch steal amour plate cannibalized from scrap of another vehicle from surplus in the salvage yard. So he now had two threats covered in the modification. Since he knew, if spotted, he would be a target from the air, he had added a .50 caliber heavy machine gun so he could return fire. 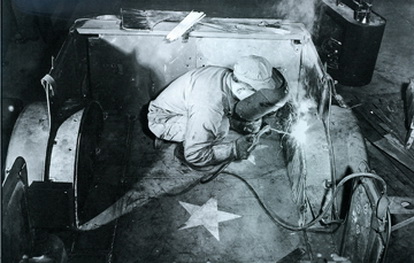 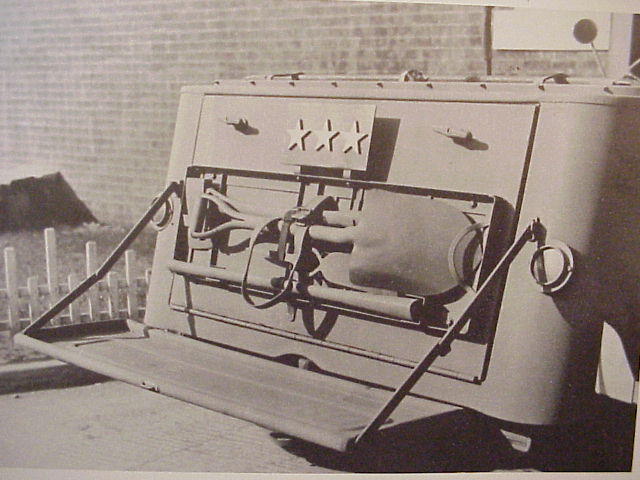 A WC 57 has almost no rear space to store or carry so a rear tailgate was taken from a dodge weapons carrier installed on a swivel hinge, on the rear of the command car. Patton believed in announcing his presence and letting his men know he was with them at the front, a place he visited constantly, regardless of where that front was. To announce his impending arrival, for quit a distance, he had installed two large air horns and a siren, of which he used frequently. On the drivers side was the insignia of 3rd Army, and on the passenger side, his rank as General. He had achieved rank of Lt. General. (three Star) when the command car was modified in England .He was promoted to full General (four star) shortly before the end of the war. Patton loved pageantry, prompt and circumstance and loved the stars of rank. He had placed on both the front and rear of his assigned vehicles, the rank of his generalship. The insignia was on metal plates, painted red, with large silver stars. The stars on his WC 57 command car were larger than on his other vehicles. Finally, he would often stand in the rear of the command car and address his troops. He had a rail placed on the back of the front seat so that when standing he had something to hold on to. 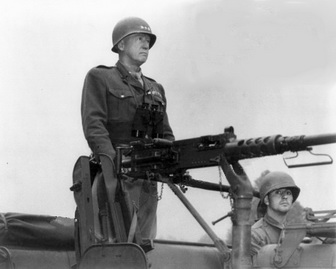 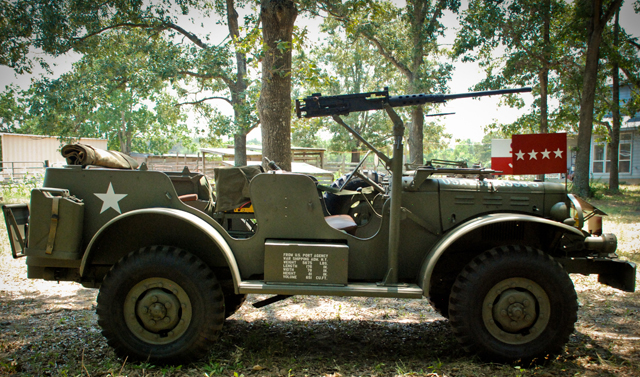 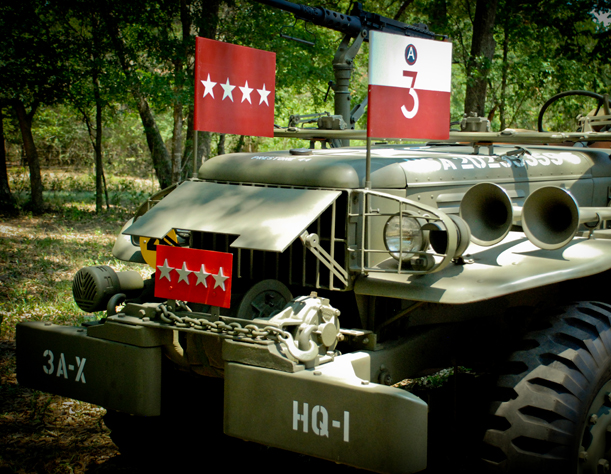 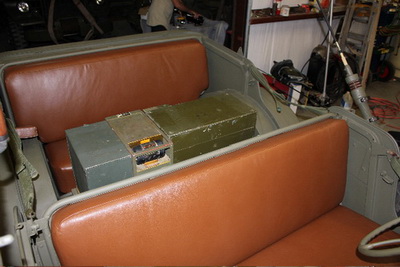 The WC 57 Dodge Command Car used on this recreation is an original WWII command car made in 1943. It is as an exact duplicate of General Patton’s command car we sought to make. There are a couple of noticeable variation as we wanted to keep the functionality of the Dodge WC 57. General Patton original command car was modified when he was a Lieutenant General. We portray him as a full four star General as we are called upon to to do quit a few events depicting him at the end of the war. In addition we felt it would be a way to honor him by depicting it at the last rank he obtained before he died. It was a gesture of respect. The front armor plate covering the front of the radiator can be closed if need be but it would cause the engine to overheat except in sub zero weather. 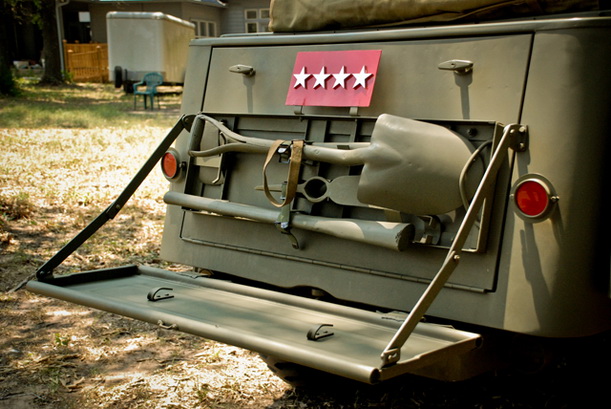 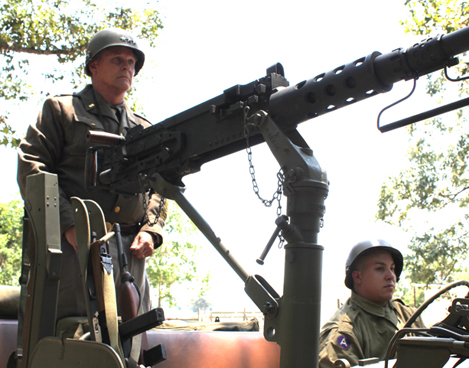 The decision was made to add a SCR 508 command radio though no pictures of Patton command car have one.The one we restored had a radio in it a one time. We felt like it would add value to the restoration so one was added. The seats are made of real leather and were duplicated by Mid West Military. John Bizal is the owner and he helped with not just parts but with knowledge and suggestion. All the reproduction parts came from his shop and are almost indistinguishable from the originals. The rear of the command car had a dodge weapons carrier tail gate attached. It does make for an excellent desk and there is just enough room in the trunk to have a map case and a very few supplies. Mounting the Machine gun post and making it functional created an interesting set of problems due to the weight and the flat bar that had to be attached though the soft skin by the foot guard on the passenger’s side. This was overcome by internal bracing. The air horns was a whole different matter since the attachment to run it off the fan belt is nonexistent today. Steve Hickman, who brought it from the ground up during the assembly phase found a way to do it, but that is a secret. The air horns work and and can be heard for miles. The siren and the horn will get anybody’s attention. The Stencils came from Rick Larson military stencils and are excellent.

Patton WC 57 Recreated and on Display

Needless to say, we are very proud of this restoration. It is not yet completely finished but quit a long way. The below are a collection of pictures showing the command car at various events. Hope you enjoy! 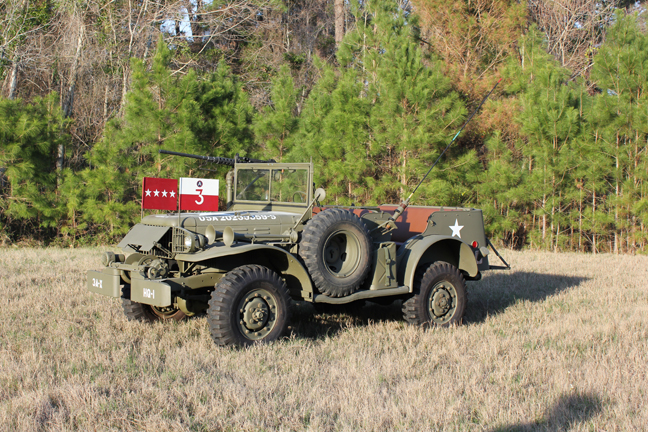 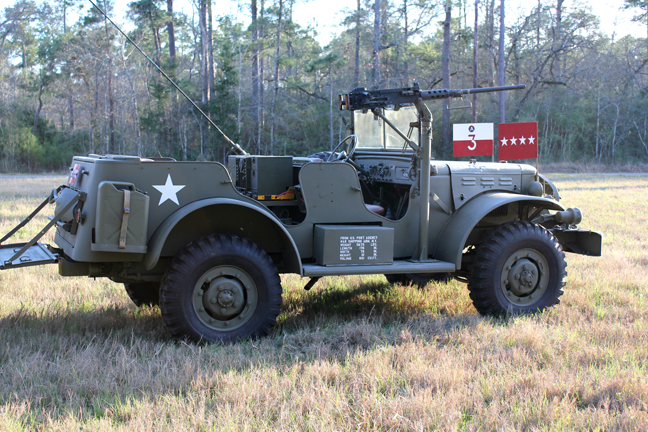 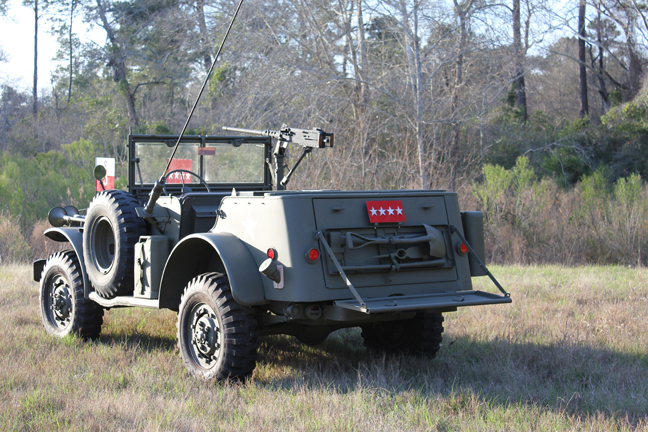 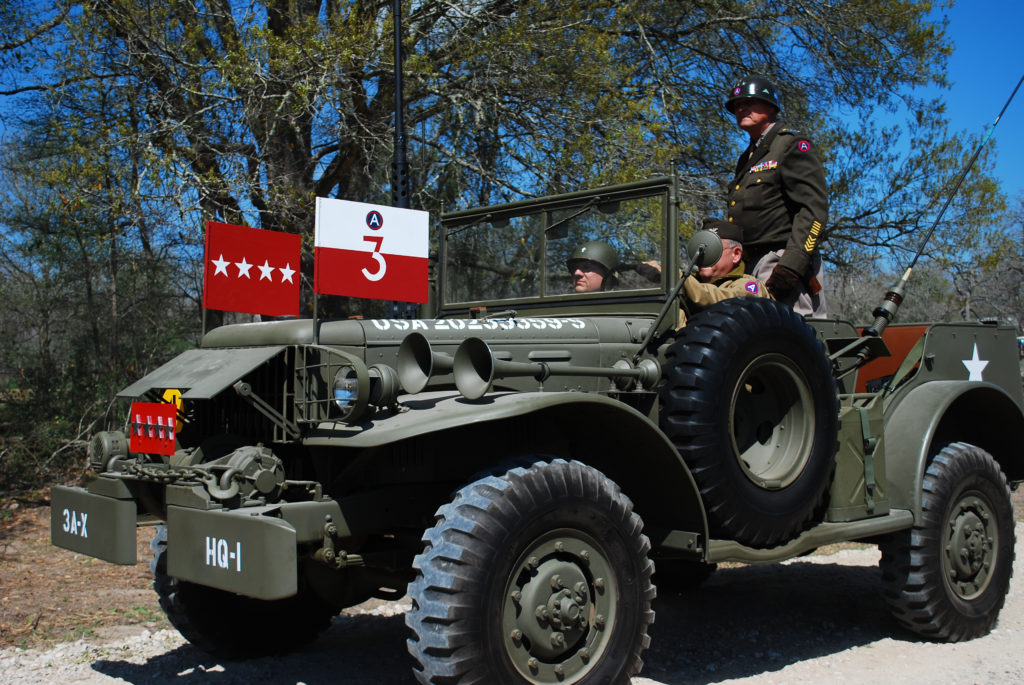 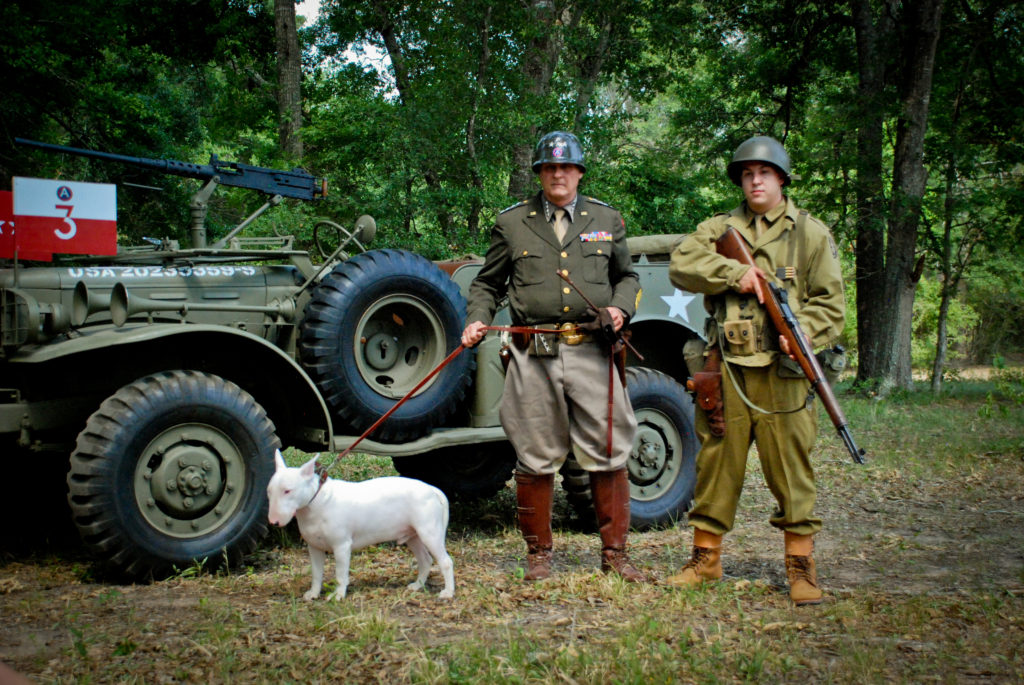 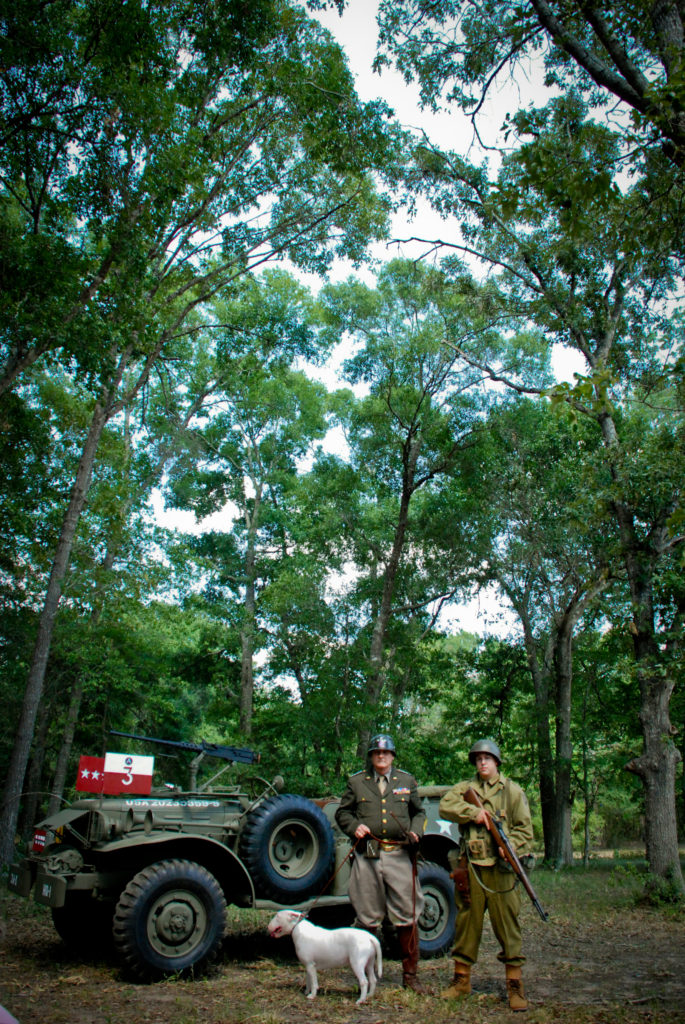 This in the first page of the restoration showing a near finished command car. When the pages are complete a ground up restoration page(s) will be made available to show all the thousands of steps it took to restore this vehicle. All of the people who helped take it apart and put it back together will be acknowledged and a big thanks given to each. However, there is a good friend who came into the project when it got bogged down. He is the man who restored this command car from boxes and boxes of parts and a shop full of command car parts. 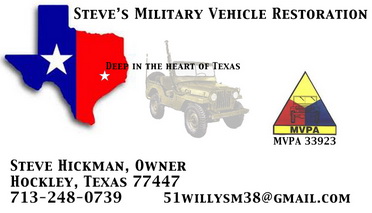 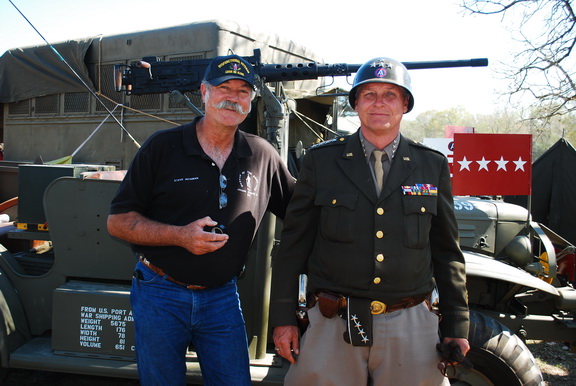