History has a way of reminding us of our roots. We are what we are today because a “history of events” live on when we learn about them. Even if we are not aware of our heritage and history we certainly benefit from it in ways that are almost to numerous to conceive. Our freedom in America was not free and was paid with a high price. It is those Veterans we came to honor. Fort Oglethorpe is a very special place to the Third Army Living Historians and it has a special place in United States Army History and specifically that of the 6th Cavalry Regiment. There is also a direct connection with General George S. Patton Jr. who, early in his carrier, came to play polo on the grounds of Fort Oglethorpe. There is a great history to know about Fort Oglethorpe and we invite you to learn more about it by going to the 6th Cavalry Museum web site. 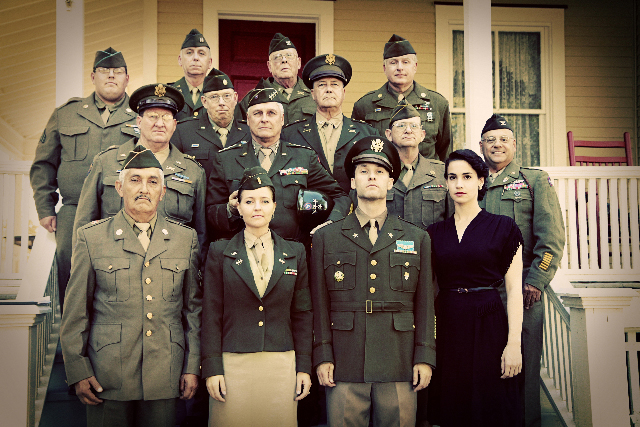 On September 4, 2010, the Patton Third Army Living Historians were very happy to team up with the 6th Cavalry Museum for a day that will be long remembered. Many of us have been involved in museums, history projects and have recreating history for many many years. Not in all of those years have we found such wonderful, loving people as those who are part Fort Oglethorpe. Fort Oglethorpe is not only home of the historic military camp but is

also an incorporated township and has grown to a comfortable size full of some of the nicest people you will ever meet. It was to this wonderful place that Patton’s Living Historians teamed up with the 6th Cavalry Museum and General George S. Patton Jr. ‘ Grandson, George Patton Waters. Advance Publicity Magazine Article

A visit on the porch

The Remembering Our Heroes presentation was scheduled to start mid morning but our day started in the morning with a visit from George Patton Water at the Victorian home we had been given to stay in for the weekend. Denny and Pat Waters talked quite a while about his grandfather. It was one of those fascinating moments in your life when history comes alive and become real and not just something from a 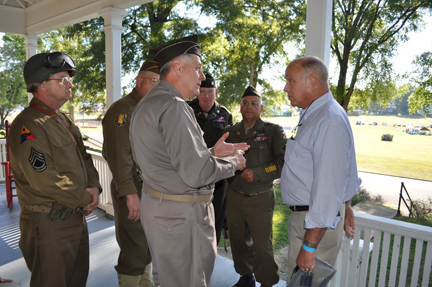 movie or history book. They talk for over an hour about General Patton. All who were there were in awe of the history being passed between the two men.

George Patton Waters, Grandson of General Patton, was a gentleman of the highest order, unassuming and friendly. All of the Patton Living Historians visited with him on several occasions. He wears a ring on his pinky finger that his grandfather, General George S. Patton Jr, had been given by his wife Beatrice on the occasion of the birth of their first child in 1911. The child, Pat Water’s mother, was named Beatrice Ayer Patton Jr. after her mother. She was to be called Little Bea all of her life. There was an inscription on the ring that was to mark the occasion of the arrival of Little Bea. George wore the ring on his pinky from that moment on. George Patton was 26 years old at the time and a Lieutenant of the Cavalry. Little Bea grew into a beauty lady and caught the eye of Cavalry Lt. Colonel John K. Waters. In 1934 they were married. Col. Waters was a carrier military soldier of the highest order. During the fighting in North Africa in 1942 he was captured in North Africa. In 1945, there was a daring raid to rescue him launched by his father in law General Patton, with elements of the 4th Armored Division. It was unsuccessful but during the raid, Col. Waters was shot by the enemy and suffering a serious wound. The POW camp was later over run by U.S. Army forces as they pressed through the area near the end the war. After recuperating from his wound, Col. John K.Waters was to serve for many more years and retired at the rank of full General.

His son, George Patton Waters, wears the ring once worn by his grandfather. He offered to let Denny wear it when Denny, as portraying General Patton, gave his grandfathers famous speech. Denny respectfully declined fearing he could lose it but thought the offer one of the nicest gesture that could have ever been offered to him. The offer just goes to show what a fine man he is, and a wonderful ambassador for the Patton family. He spoke later at the banquette and was quite a good speaker and the hit of the entire event. Here is a close up of the ring worn by General George S. Patton Jr. ring. 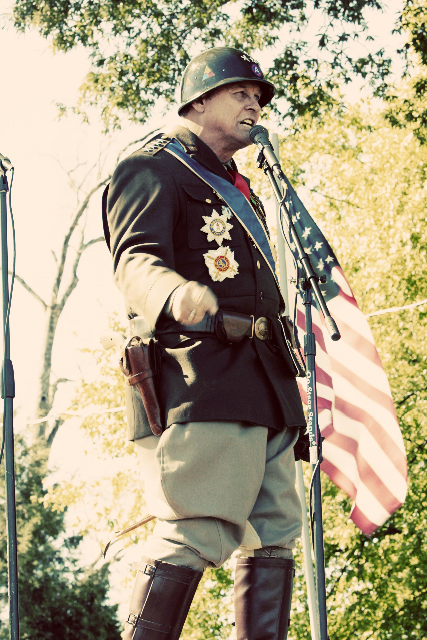 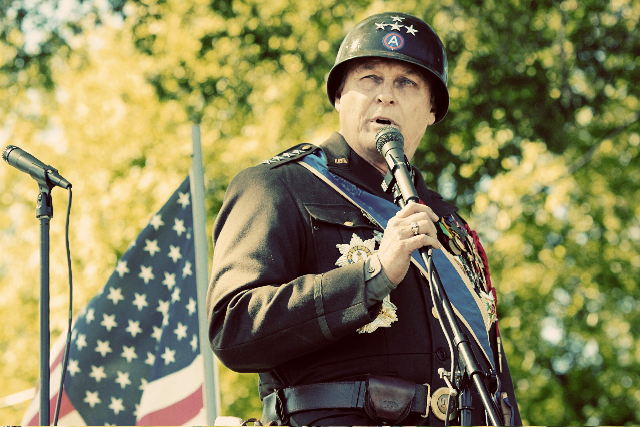 The 6th Cavalry Museum is one of the finest military museum organizations in the country. They have great plans to expand their organization and have an annual event to Remembering Our Heroes. There were exhibitions that included a Vietnam Honor Wall and booths to support the troops.

There was a well thought out reenactment and the event was well attended. General Patton’s grandson, George Patton Waters, was a real hit with the crowd and was a fine example to all of the great heritage to military history that the Patton family projects all over the world. He posed tirelessly all day for photographs. 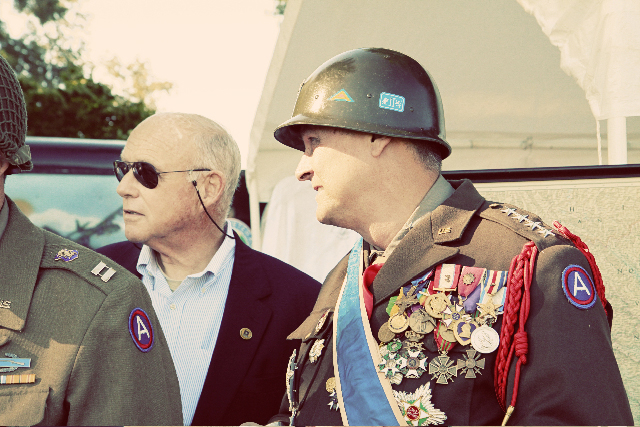 General Patton portrayer Denny Hair and Pat Waters got along famously and spoke, in concert, with each other depicting the a true legacy that the great General George S. Patton Jr. had left.

History at it Finest 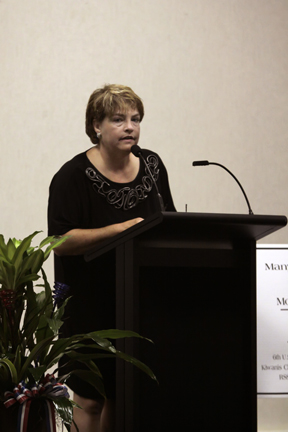 The banquet was hosted by the 6th Cavalry museum and the master of ceremonies was Executive Director Chris McKeever of the 6th Cavalry Museum Association. She is an organizer extraordinaire. That evening there was a gala banquet held and keynote speaker, George Patton Waters and the 3rd Army Living Historians were the honored guests.

Denny Hair was asked to speak first and gave a rousing history of the 6th Cavalry regiment and how it evolved into the 6th Cavalry Group of WWII and served under General Patton and is famous Third Army of World War Two. 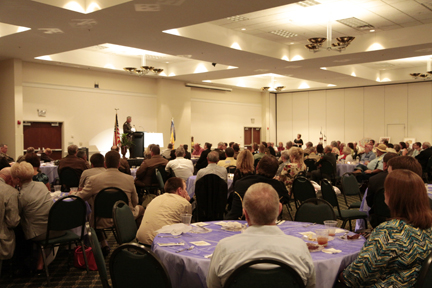 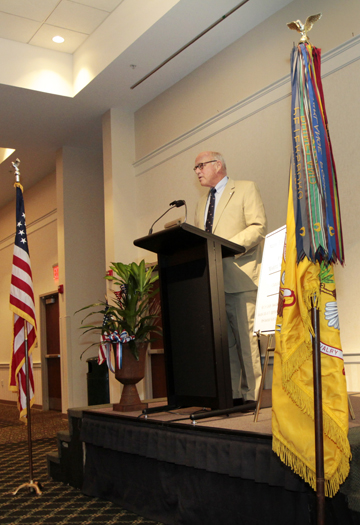 Now the audience was in for a real treat. Keynote Speaker George Patton Waters gave a most interesting speech as to his recollections of his grandfather from when he was a young child. He also told a few stories of his grandfather and explained a little of what it was like being a part of the Patton family. The audience was mesmerized to see history come alive as he spoke. He explain how his grandfather was well aware of the “Luck” he felt like he had and thought he had a certain amount of it that was pre-apportioned to him. He believed in it so much that he wore lucky charms and even had a Saint Christopher medallion nailed into his combat boots. Pat Waters brought those very boots to the banquet and they were on display for all to see. He also brought a wonderful photo book showing a history of the Patton family in photographs.

Both Denny Hair and George Patton Waters were well received and both received rousing applause and standing ovations. The event was a wonderful and complete success. It was so because of the fine people or Fort Oglethorpe, The Museum Board of Directors, its Staff and the fantastic business community, officials ands town’s people. 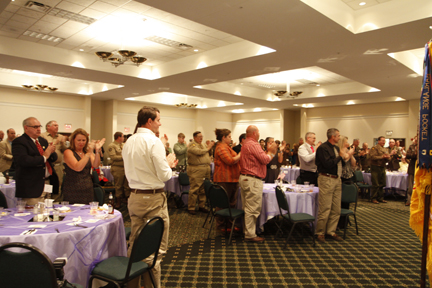 We are particularly thankful to Executive Director Chris McKeever of the 6th Cavalry Museum Association. As we said, she is an organizer extraordinaire. She provided a wonderful Victorian Home and introduced us to some of the nicest people you could ever want to be around.

We were pleased to be able to have our National 3rd Army Staff in attendance with us and we had 15 of our members make the trip to Georgia. For those of coming from Texas, it was over 1850 miles round trip, on average and longer for others. The Third Army Living History Command Staff, 503rd MP Battalion, Signal Corps and Transportation Corps functioned flawlessly. This article appeared in a local newspaper about the event.

We wish to thank the great people of Fort Oglethorpe for their warm hospitality and now consider them part of our friends and family national network. We accomplished our mission to honor our veterans through Living History and public education.