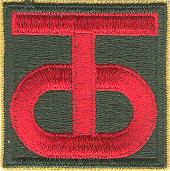 The 90th Division had their 77th reunion since their formation in 1918 in San Antonio Texas on September 1, 1995. Many of the veterans were in the 90th during WWII and this marked their 50th reunion since the end of WWII. This event also coincided with the worldwide commemoration of the ending of hostilities in WWII.

The Tough O’mbre was the nickname of the 90th who fought under General Patton and his Third Army. The T. O of the patch insignia stood for Texas-Oklahoma Division.   On this date the 90th ARCom dedicated one of their building to General Richard G. Stilwell, who had commanded them in World War Two. 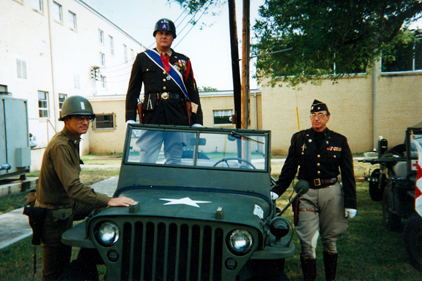 General George S. Patton Jr. was asked to be a special guest (Denny Hair) and was accepted with great enthusiasm. Many war stories were retold as he mingled through the audience. When Patton was interviewed about the experience he said, “ They know it is really not General Patton as he died in a tragic car accident in 1945 but they did not mind as there was things they wanted to say to him. I became very touch when a veteran came up to me and said, Sir, I want to thank you for your outstanding leadership. We believe that your constant aggressive attacking caught the enemy off guard and saved many lives. I think I am alive today because you were in command then” I thank in behalf of General Patton and only wished as they did that he had lived to be part of the many reunions after the war. ”