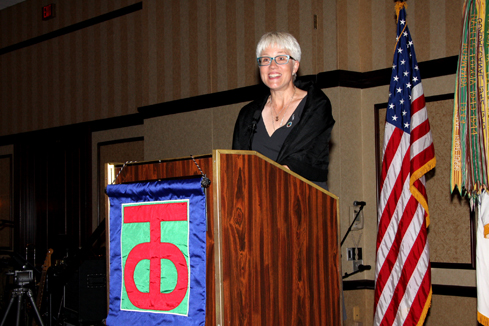 The room was dark, the veterans of the 90th division had just heard from Helen Patton, granddaughter of General Patton of WWII and daughter of Maj. General Patton, Patton’s son. The room suddenly went dark. A siren was heard as it gradually grew in volume and filled the room. 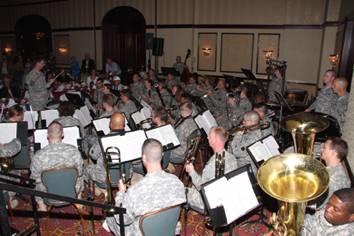 The band played four ruffles and flourishes as the silent entourage moved forward onto the stage, in the grand ballroom of the Sheridan Hotel in Irving Texas was hushed as they watched. Two flags were posted and the colors of the 3rd Army was once again with the beloved 90th division. What was going on? They 90th only knew there was a surprise guest and thought it Helen Patton. 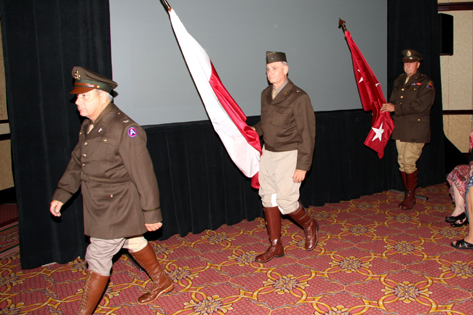 Then a four star general’s flag was posted and Lt. Col. Charles Codman, Aide to the General; (Ken Hightower) stood at the podium. ATTENHUT!!! A pin could have heard drop on the floor and a familiar figure made his way to the stage and the podium. Representing Third Army Headquarters on stage were Chief of Staff, General “Hap” Gay,(Bill KcKown) Major General Maurice Rose, (Ken Rose)Third Army Chaplin Lt. Col James H. O’Neill, (Steve Damon). There too were the trusted MP’s personified by Patton’s personal bodyguard and driver Lt. Homer Thomas and Capt. Will Bickers, in charge of the MP attachment. In the Audience was Col. Oscar Koch, Intelligence and Chief of Staff this Third Army. CWO of Special Services Ken Spencer carried out his duties of Deputy Chief of Staff. 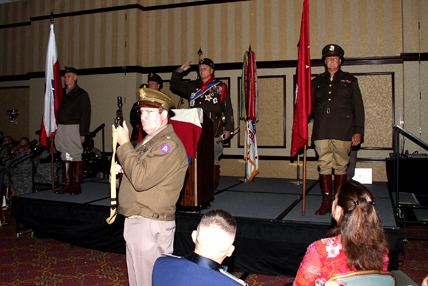 In a twinkling of an eye the room traveled back in time……  General Patton appeared on stage and as the band played on a slow and deliberate salute went up to the 90th division and General George S. Patton Jr. was among his beloved 90th division one more time.  Be Seated!!!! was heard. In silence the slow and respectful salute came down from the darken stage as the spotlight found the old man of the past. 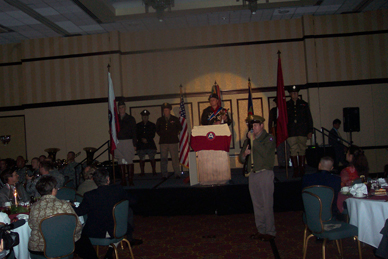 Then he spoke…” I have traveled time and space to be here with you tonight on the occasion of the 90th Divisions 90th Reunion. Tough ‘Ombres! You truly don’t know just how good you are! The 90th division was one of my toughest fighting divisions in Third Army and I am deeply honored to be here…”

General George S. Patton Jr. was among his beloved troops of the 3rd Army once more. It had been 63 years since the two of them had served together and time stood still as they once more went back to the hills of England in March of 1944 and followed the path of the 3rd Army and the 90th Division as it crossed Europe. 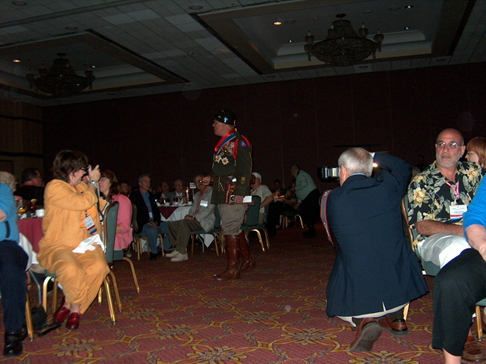 They harkened back in their minds eye to their youth and to a world war. Many in the room had heard General Patton talk in England and during the War as they advanced and “Toured Europe with an Army.”As the general spoke, the memories flowed. These heroes of the great generations were now in their 80’s and beyond. Some were in their mid-90’s yet for a few moments they were all united in their youth as the memories of this great generation came pouring back.Many had taken their grandfather to this reunion and were hearing, some for the first time, what their grandfather, father and even their great grandfather had done. For 45 minutes they, the general and the division, reminisce and as they once again fought across Europe to liberate it from a mad man and his Nazi fanatics. 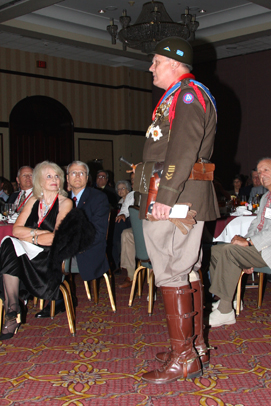 As the speech came near the end the General became silent for a moment and repeated his words to them he had said some 63 years earlier, on May 9, 1945.

“During the course of this war, I have received many promotions and decorations far above and beyond my individual merit. You won them. I, as your representative, wear them. The one honor, which is mine, and mine alone, is that of having commanded such an incomparable group of Americans, the record of whose fortitude, audacity, and valor will endure as long as history lasts.”

When the General finished and went to leave the room, a standing ovation came as all went to their feet. There were tears and smiles, laughter and joy, sadness and longing as the warriors of the 90th division stood and remembered once more. 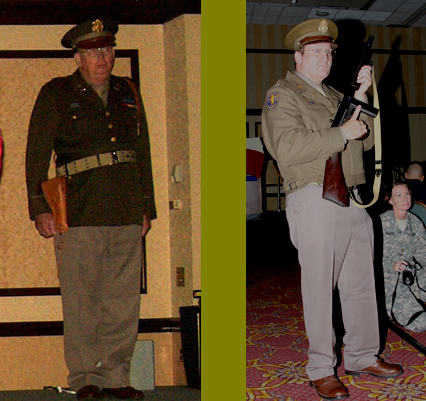 The Security for the Speech and for the weekend was handled by Lt. Homer Thomas and Capt. Will Bickers

Afterwards that evening and well into the next day, the General and the Veterans remembered 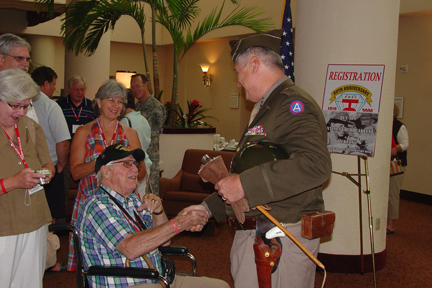 Many 90th Vets brought three and sometimes four generations with them. The history of the 90th division and the service to their country was once again shared from one generation to another.

Retired Major General Elvin Scholfield 90thRcon receives the 3rd army award for excellence. He has been instrumental in supporting the 90th and it’s history all of his career and well into retirement. His public service with the Light House of the Blind and numerious other contributions caused the reconition of him and it was well deserved.

One of the high lights for our Deputy Chief of staff, Chief Warrant Officer Ken Spencer, was the honor to represent the Gulf War Veterans as he pined the 1991 Battle Streamer on during a wonderful ceremony commemorating those that had gone before.

This was a great honor to be able to attend the 90th Division 90th reunion and represent General George S. Patton Jr. and his Third Army Staff. We salute you and honor your service.