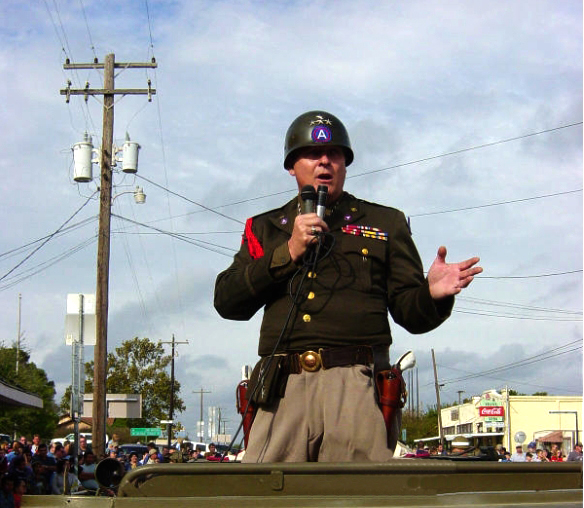 Most re-enactors dream of reenacting in a town setting. Seldom does this occur, as there are simply no vacant towns to do it in. The best they are able to do is at a military base’s combat village or an abandoned building or two. In 2002 the 6th Cavalry Historical Association was able to organize and put on a show battle in the middle of a real town with the blessings of the city council, the major, city officials and the town’s people. This was a first! The idea behind doing it, besides having a lot of fun, was to be an educational event and make history come alive! The planning for this event took over a year and hundreds on man-hours and many trips to La Vernia Texas. The President and founder of the 6th Cavalry Historical Association, Denny Hair, ask local Military Preservation Groups, re-enactors and elements of the Commemorative Air Force, (formerly the Confederate Air Force) consented to be involved. The 6th Cavalry board of directors, at the time, was an immense help and several of them did quite a bit to help. They were Denny Hair, Carlos Manning, Jack Slattery, Bruce Buskirk, Jim Saylor, Mike Sabota and a couple more whose names now escape the writer of this. The lion’s share of the “moving and shaking” went to Bill Wiseman who donated his property for a WWII reenactment in conjunction with the local authorities who he also knew and worked with on the event. 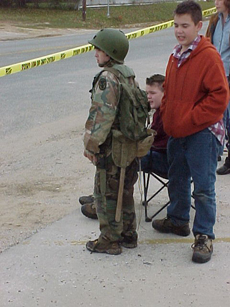 As the event week grew near, many of the re-enactors went to the local schools and gave living history lectures and demonstrations. Most of the La Vernia school children in elementary, middle school and high school had some project to do in regards to the event.  Many came dressed in military uniforms to see the event. This meant some study and care was taken and lessons were learned.  This was the first time in any one’s recollection an entire Texas town, or any town was used to reenact a WWII battle. There were a couple more La Vernia town battle after this year but this was the first and the best attended.

The Germans had occupied the town and the allies were pushing into it from the west. They slowly moved in front on the townspeople and got into position.

The German re-enactors addressed the town as if they were really somewhere in Europe and established a curfew and told them what would and would not be tolerated.

This added to the realism and the local businesses open up their stores and allowed re-enactors to hide behind doors and sides of buildings as the allies approached.

Elements of the 82nd and 101st Airborne parachuted in as the allies made their attack in the daybreak.The battle came down the main street of town and as the allies arrived, the battle intensified minute by minute.

The battle of the skies was going on as the C.AF performed for the crowd.

The town’s people were within feet of the battle and could experience the fury of a battles as they watched. 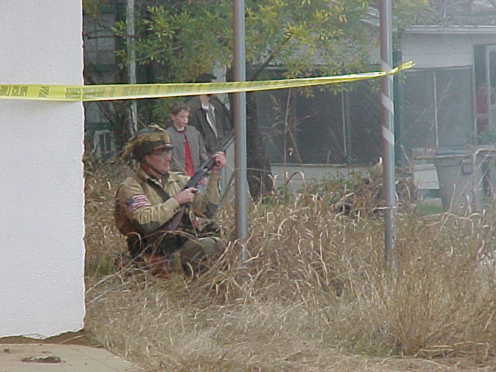 The battle was fought to the middle of town where most of the crowd watched intently.

Then it turned north toward a vacant mill.

There, at the mill, the German’s made a last ditch defense before they were blasted out by an array of pyrotechnics overseen by Carlos Manning.

At the end of the battle, all of the re-enactors were lined up for photographs and living history demonstrations. The spectators got to ask questions and get their picture taken with the living historians. 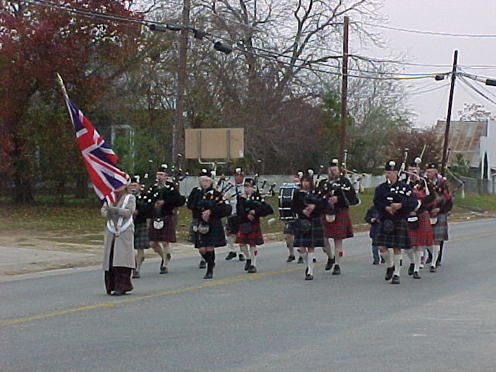 There was a great parade. The entire event moved down the road in a parade toward the fire department. There was going to be good old fashion BBQ and lots of fun. Next to the fire department was were a living history display. The town had many venders and it tuned out to be a great time for a small town to enjoy each other’s hospitality and good clean fun. General Patton, portrayed by Denny Hair, was the MC for the event during the show battle and the public display. A private reenactment was held at Bill Wiseman’s ranch and fun was had by all. This included the German forces occupying a house and defending which was also a very rare occurrence in re-enacting circles. Prior to this town battle, no one in living history and re-enactment circles could recall a single event ever stage in a town for a town anywhere in the United States. This was believed to be first!