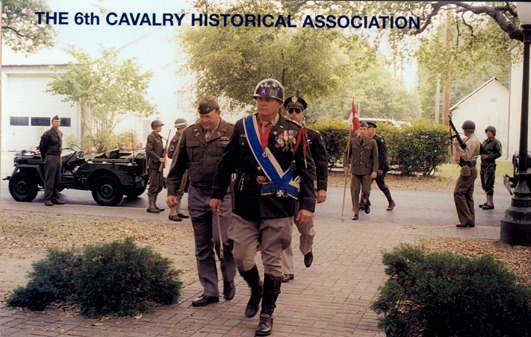 The 6th Cavalry Historical association is an excellent way to have good clean fun with your military vehicle and go to some great events. Denny Hair is one of the founders and it’s first president. In 1998 Patton and the 6th Cavalry was invited by the City Manager at the time to give a speech commemorating Memorial Day and remember the WWII veterans.  It was to bring the whole setting back to WWII, as it would have been then. The 6th Cavalry had a great time pulling this off and decided to arrive as Patton would have arrived in WWII to give his famous speeches. A caravan was set up and form from Mayflower Street in Houston. It was about a 10-vehicle convoy complete with jeeps, weapons carriers and trucks. The convoy proceeded down Park Place to Interstate 45 and then about a 45 minute trip south to League City. Upon getting close the sirens began to blare and the whole entourage arrived at once. The event made the local papers and was talked about for years to come. So far, the only surviving photograph of this event has proved to be one of the best ever taken. There were quit a few members who participated in the event.