On Saturday March 2, 2008 a filming was done by a film crew depicting the 1941 Louisiana Maneuvers. We met at Camp Beauregard in Pineville, Louisiana. Much of the filming took place in Alexandria; over some of the same area the original maneuvers had taken place. The reason for this was a living history project being undertaken for the Louisiana Public Broadcasting. Many veterans, still living, were being interview as part of the Louisiana Greatest Generation project. The goal was to tell their story and preserve both the rich history of Louisiana and insure their story was told before it was lost to time with their passing. Because the (Greatest Generation) as it is now known were passing away at a rate of 1,500 a day, it was felt that time was not on the side of preserving this rich history.

Veterans were being interviewed and their recollections were being put to film and text as they were located and interviewed. Several of the veterans explained that he had been a part of the 1941 Louisiana Maneuvers and had participated in them with General Patton, who was a Major General at the time. These maneuvers were a very important part of U.S. Army history as the pitted men and horses against men and machinery. There was also a question as to how armor was to be used. Was it to be a part of the infantry or was it to be fighting force of it’s own with it’s own table of organization. One of the out crops of the lessons learned from these maneuvers was to spell the end to the mounted branch of the U.S. Cavalry. It was ironic that a cavalry man (General Patton) was to use mechanized forces to show the short coming of mounted horse cavalry in modern battle. General Patton believed both could and should have been used but the Army Brass saw the logistics of moving mounted men and horses across the ocean and to re supply them as untenable giving the success of the mechanized forces. Finally Patton proved that armored forces, separate but part of a larger fighting force should be used in conjunction with Infantry divisions but not a part of them. This was the beginning of the Armored Divisions and Mechanized Cavalry.

The maneuvers were also a test of equipment and tactics to be used in the event America entered the war, which at this moment in time was “officially” not at war. The test also brought General Patton to the forefront for his daring tactics and quick and decisive actions. Senior to most in the Army, Patton continuance in the Army depended on how he performed. It was becoming common practice to “retire” older senor staff in favor of a younger, more aggressive up and coming staff officers. It was to this back drop that the filming occurred. America’s armed forces had been reduced to a 100,000 manned force and little new equipment had been introduced since WWI. Most of the infantry uniforms and gear dated back to 1918 and some through the 1920’s. In 1941 about a 400,000 man force was being tested. There was a build up of arms but some of the training still had to be done with wooden machine guns and other make shift props to simulate combat condition and equipment. WWI helmets, riding breeches and bolt action rifles were still and intricate part of the equipment. Referees were to judge the red and blue forces as to combat readiness and effectiveness of tactics. The outcome of these maneuvers would have far reaching effects on war production and the war effort. 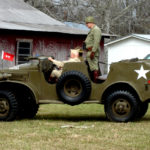 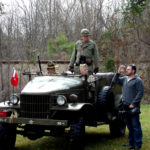 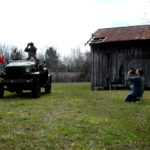 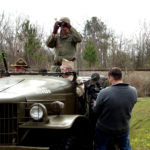 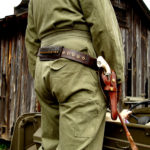 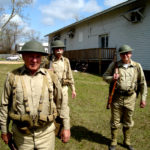 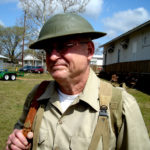 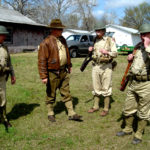 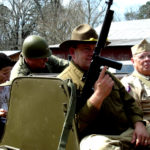 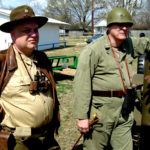 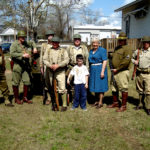 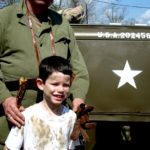 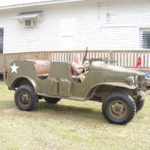 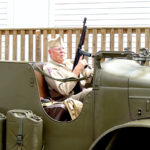 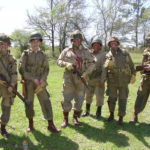 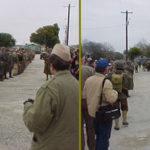 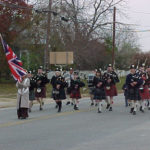 A note from the film’s producer

I’ll definitely remember you! (I still have a large bullet you gave me sitting on my desk!) I will send you a finished copy of the documentary for you to keep. Unfortunately, our funding was cut off before we were able to complete it, however we pressed on and completed it anyway in order for us to at least have the finished product.

Send me your mailing address (unless it is on your web site, I can get it from there), and I’ll mail you a DVD!

Thanks Denny! You were a wonderful asset to the project, and a great Patton! Thanks again!