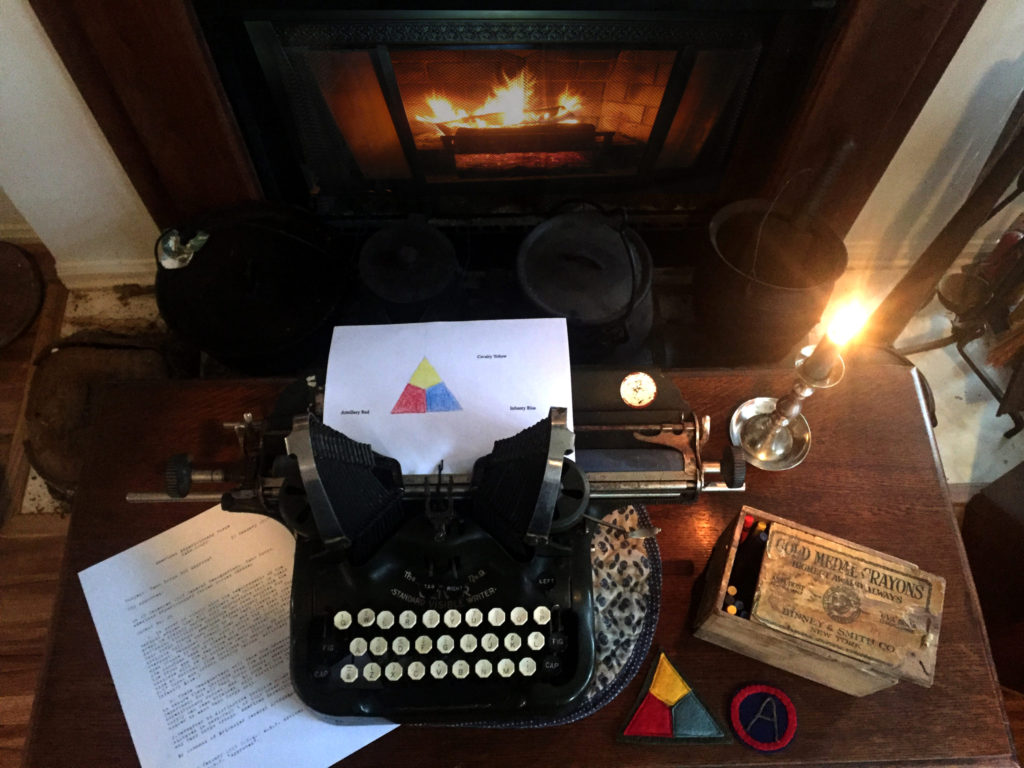 It was not until 1919 that the shoulder sleeve insignia of the Tank Corps first shoulder insignia would be officially approved. However, it was sewn on and went into battle long before it was approved officially.  It is interesting to note that it was also in that year of 1918 that in December the 3rd US Army, the Army of Occupation, would also be established and they too would design a shoulder patch. It would be 26 years before General Patton would put it on.  That is a story for another time.

Patton had requested that a patched be designed to represent the newly formed tanks and training at the Tank Training Center at Langres where light tanks had their headquarters. 2nd Lt. Lee G. Robinson wrote some years later “Not long after arriving, some Division, or the advance elements came in, I believe it was the 82nd,
The first we had ever seen. Patton, at mess that night, said I want you officers to devote one evening to something constructive. a shoulder insignia.

We claim to have the firepower of artillery, the mobility of cavalry and the ability to hold ground of the infantry- so whatever you come up with it must have red, yellow and blue [the traditional colors of artillery, cavalry, and infantry] in it

“I was billeted with a medico, Lt. Howard and we spent all that evening with some crayons . . . in front of a fireplace figuring out use of the colors and a design . . .

At breakfast the next morning everybody showed up with their attempt. I guess we were the only ones that had managed to get color on ours. In any event Patton adopted our design [a pyramidal figure] and pulling [out a] $100 dollar bill, the first I had ever seen or at least held in my hand, he told me to take one of the . . . vehicles . . . and go into Longue [Langres] and get as many of our shoulder patches made up as I could get and get them back by Retreat. “

The tank center was moved to Bourg on February 22nd and is a short timed after than that Patton sent Robinson to Bourg to have the newly design patches made.

Robinson said, “I managed to get the three colors in felt at the Belle Jardineer a big store on the Place Diderot and took them into a hat and cap shop next door and persuaded the old lady in charge to start her crew making shoulder patches. They did a good job of them and I had one sewed onto my overseas cap, as a possible idea of a new use of them and got two or three hundred of them out to Bourg before retreat.” 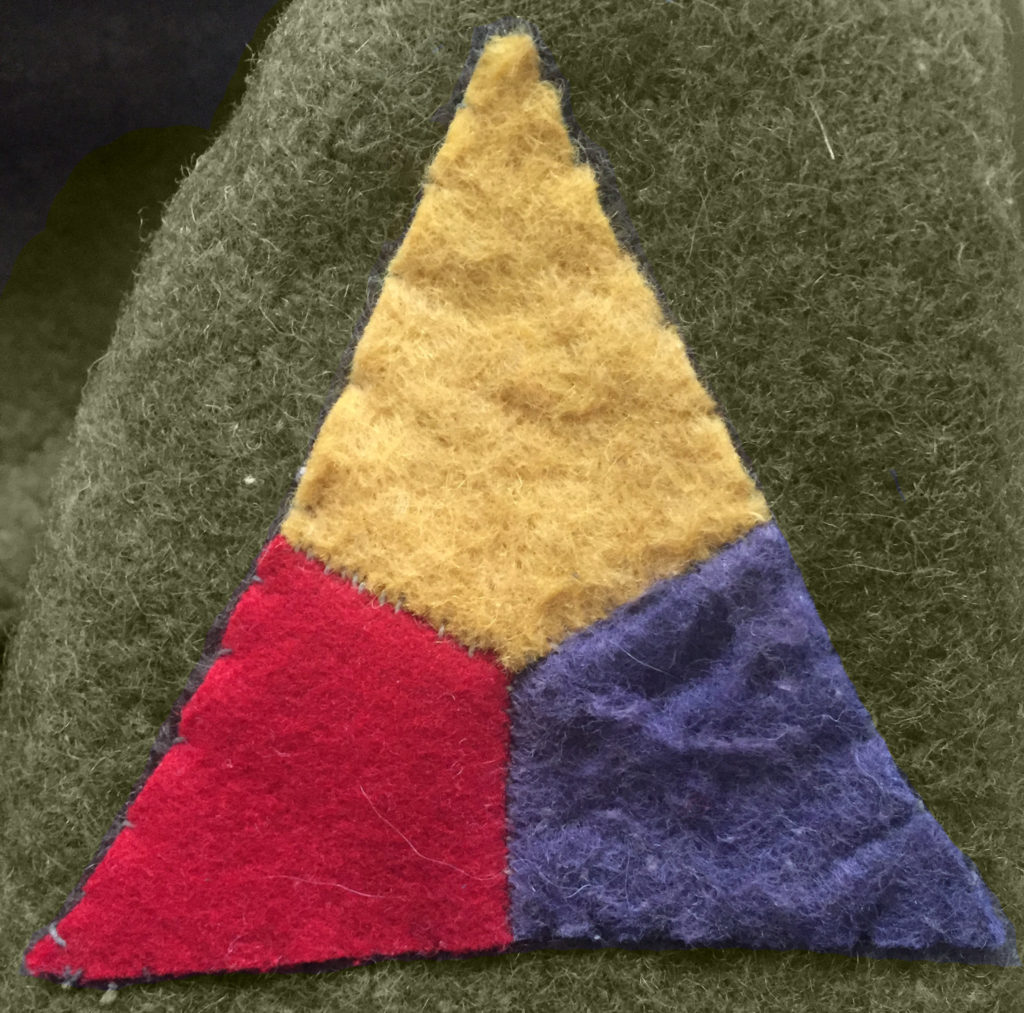 “Patton was tickled about it. If there was anything he wanted it was to make the Tank Corps tougher than the Marines and more spectacular than the Matterhorn. That triangle [shoulder patch} was the first step. A few days later he conceived the idea that our overcoats were all too long and he ordered them cut to knee length and the surplus made into belts. We were different all right.”

Note: None of the AEF patches were official but caught on like wild fire. They were being made out of what ever material was available and each of the divisional patches were different and hand made. This was allowed by General Pershing until he could get official guidelines drawn up and should sleeve patches approved through his headquarters.

The Official record reads: TANK.CORPS
SSI Approved: 30 January 1919
On 19 December 1918 General Headquarters, Tank Corps, American Expeditionary
Forces issued GENERAL ORDERS No. 25 ” l. In order to comply with the requirements of the various Armies that all Officers and Soldiers in their areas be plainly marked with appropriate insignia the following distinctive insignia has been adopted for Tank Corps troops, American Expeditionary Forces . This insignia will be worn only on the left sleeve of coat, overcoat, raincoat, trench coat, and olive drab shirt, when blouse is not worn, with yellow tip l inch from the shoulder seam of sleeve of coat, red point being to the front and the red-blue edge horizontal. This insignia will be of suitable heavy cloth, in colors and size as follows: (The insignia is depicted indicating 2.5″ Sides and colors Cavalry Yellow, Artillery Red and Infantry Blue.) 2. These Headquarters will take the necessary steps to secure these insignia from the Quartermaster ‘s Department for all Tank Corps troops, American Expeditionary Forces, and, as soon as the necessary supply has been obtained, will distribute the requisite number to each Tank Corps unit. 3. Hereafter no distinctive insignia other than the one dictated in paragraph 1 of this order will be worn by any Tank Corps troops, American Expeditionary Forces. By command of Brigadier General ROCKENBACH.” On 30 January 1919 G.H.Q., A.E.F. advised Chief of Tank Corps, A.E.F. “Approved“.

It is highly recommended if you are interested in the origin of shoulder insignia that you read  the below book. It is the best resource I have found and highly recommend it.