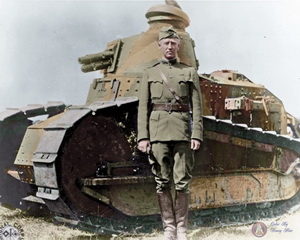 Seventy plus years after his death and becoming an American icon with no equal World War II, General George S. Patton stands out in the American conscious better than any other general. As a combat general he was unequaled, fearless, brave to a fault and keenly aware his destiny was in the hands of the Almighty.

Hundreds of books, motion pictures, documentaries and countless studies have be done about him. Those that knew him, worked for him, read about him and historians who have studied him have all had some sort of love/hate relationship about him or his tactics yet there are few who have an ambivalence of him and most come away in awe of the man. 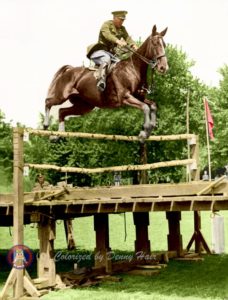 This web site is dedicated to the preservation of his history and his command, Third Army, through living historians of today who actively have researched every aspect of his of his military life and those of his immediate circle.

Patton Third Army, Living Historians have studied all the Battles

the Third Army fought, under what conditions, the various strategies and equipment that was used. Over years they have acquired proper uniforms, restored the equipment & vehicles allowing them to authentically re-create and re-enact

the period and bring history alive to audiences all over the world.

In his life time he was the most feared and respected combat general on both sides of the war. He won the war on the field of 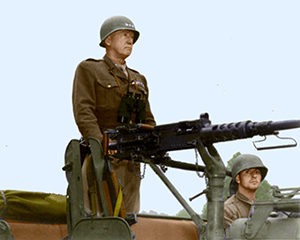 battle but lost the war in the political field with the High Command of the American Army. His vision of the future leads him on a collision course with command. He was never quite able to convince his superiors that he was not the enemy when it came to getting permission to continue to fight the war as he saw fit.

Historians today now see the war from the advantage of 20/20 hind sight and their are many who believe if he had been allowed to fight as he wanted to the war in Europe would have ended by November of 1944 saving some 10 million lives on both sides, civilian and combatants.

The veterans who fought the war are leaving us at a rate of about 1,500 a day and some two thirds of them are no longer with us. Most are in their 80’s with failing health and within the next twenty five years they will have all gone.

Above all is our willingness to honor them and their fallen comrades. We do this by restoring and preserving what is left and using it to tell their story. You will read about the war, the men who fought it, the museums and the living
historians, collectors and 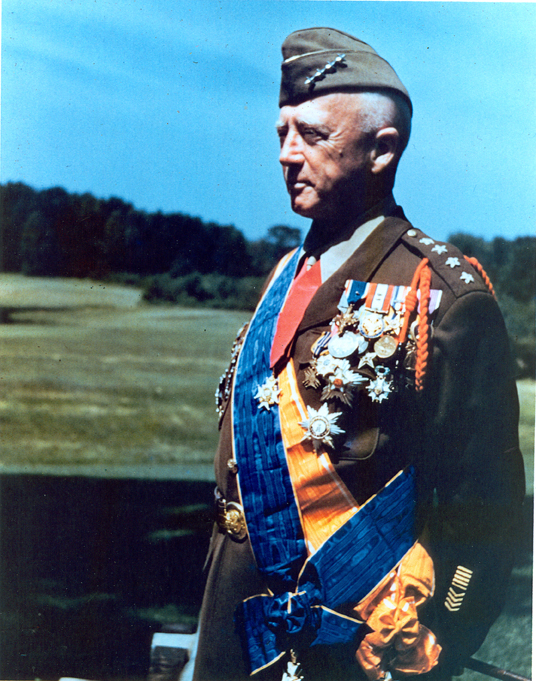 preservationist who have spent countless hours and dollars to preserve their memory.

Over 50 million people lost their lives in World War Two. You must ask yourself why they died and for what reason. When you know the answers to those questions you will know why we honor our Veterans. Freedom is not Free it has a high cost.

Patton Hidden in Plain Sight:
The Story of Patton and his Third Army, Hidden in Print for 75 years
“The Images Uncovered”

I am pleased to announce that the first book on a series of books I have written is now available.
Copies are now available using this link. https://www.createspace.com/5616230 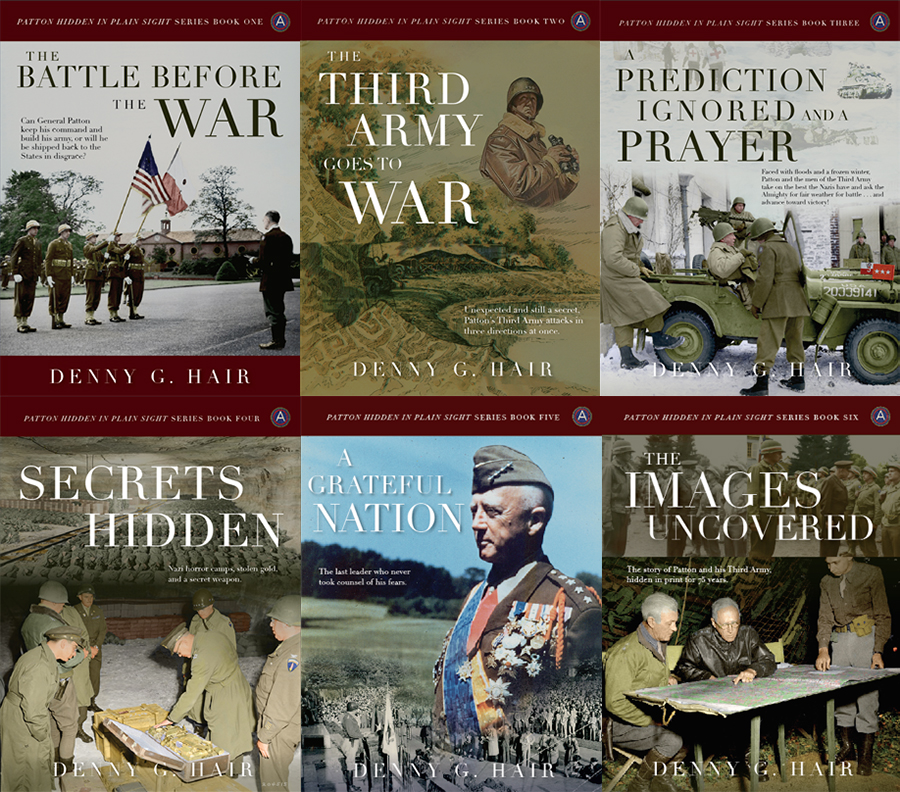 Most, who know me, will tell you how excited I am. The “Patton Hidden in Plain Sight” series of books has been one of the hardest things I have ever done.  It was worth doing because we owe so much to the Greatest Generation, the generation of our parents and grandparents.

This is the first of four books in a series called “Patton Hidden in Plain Sight, The Story of Patton and his Third Army, Hidden in Print for 75 years. The “Images Uncovered” is the photo-book in the series and can be read without having to have the other three in the series. The rest of the series, a triogy, will not be available until mid to late 2016. This book has many photograpghs not found in other books, some in color for the first time. If you are a General Patton fan, or are just curious about him, this book gets to the truth and separates fact from fiction. This book is endorsed by George Patton Waters, one of the grandsons to General Patton. It is also endorsed by noted author Robert Hayes who helped General Oscar Koch write G2-Intelligence for Patton. 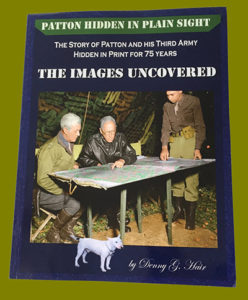 “The Images Uncovered”
The is the photo book, a coffee table book that is a result of thousands of hours of research and covers new information about General George S. Patton Jr. Many of the images have been colorized and some have never before been published and Hidden in Plain Sight since WWII. There are images from the rare and top secret Third Army After Action reports and many not seen since they were first printed in 1945. Included are rare personal accounts from General Patton’s staff with insider’s view of Patton’s Third Army Headquarters.

You can follow General Patton, through the “Images Uncovered” from his doubts to his triumphs as he leads the famous United States Third Army across Europe. Many of the images are from General Patton’s own collection, the Library of Congress and the Patton Museum at Fort Knox. Thousands of sources were researched to correct the misconceptions and separate the facts from the fiction, and the movie and his career.

The book has been meticulously researched for almost ten years and is the first of a series of books covering Patton and his Third Army in WWII. This is a stand along book and a companion book to the Patton Hidden in Plain Sight series that will be out in 2016. This book may not be suited for a young audiences due to Patton’s colorful language and descriptive accounts of the Nazi concentration camps that Third Army liberated. 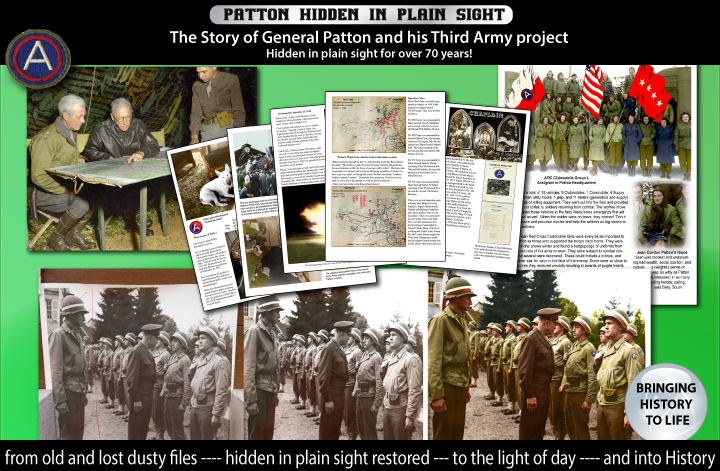 Patton Hidden in Plain Sight, The Story of Patton and his Third Army, Hidden in Print for 75 years by Denny Hair

READ ALL ABOUT IT HERE

A wonderful volume for anyone who has an interest in the Third Army in the Second World War, Gen. George S. Patton, or the soldiers he commanded. This book was of special interest to me (disclosure here) because my father was Patton’s bandmaster and I was able to provide the author, Mr. Denny G. Hair, with some information about the Third Army Band and photographs that he had not been able to find. But, my personal interest aside, this is one of those great illuminating photo texts about “the greatest generation.” Many of the photos in here are worth a thousand words in their own right.

5.0 out of 5 stars
A treasure of meaningful images
1st reviews in from Amazon
By Robert on November 9, 2015
Verified Purchase

Denny Hair has done a remarkable job of putting together a valuable collection of photos of Gen. George S. Patton Jr. and others, along with the varied physical elements (both internal and external) related to his command of the U.S. Third Army and its march across Europe in World War II. The title—“in Plain Sight” notwithstanding—many of these surely were stored away in remote locations where they rarely if ever would have been seen by the general public, or even military historians. To have them all together in the pages of a single book gives anyone interested in Patton himself or the war in general a treasure of meaningful images. Through the photos and just enough descriptive information to put them into context, Hair takes the reader from pre-European invasion days all the way through to the end of the war. He provides through-the-lens views of virtually every aspect of combat as it happened in the Patton command……

5.0 out of 5 stars
A Great Study of Patton
By D.W.DAVIS U.S. Army [retired] on November 2, 2015 Great book / well researched / highly recommended for the military historian

Finally a book that describes the inside story of General …

Have you ever seen a photo of one of the world’s greatest generals in a bathing suit? It is in Denny Hair’s book along with hundreds of other photos, maps, stories, and more. If you are a student of history, especially military history, this book is a must. Your eyes are drawn to the next photo along with well-researcheD commentary to go along with it. We’ll done, Mr. Hair!

5.0 out of 5 stars
Collectors and military vehicles will be pleasantly pleased with the variety of artifacts that illustrate the book …
ByJohn Adams-Graf on January 5, 2016

A retired crime scene investigator, author Denny Hair has emerged as an expert on all-things Patton. This book is a result of thousands of hours of research and covers new information about General George S. Patton Jr. Hair has coupled personal, anecdotal accounts about Patton with hundreds of photos of the General, some of which have been colorized, and many never before published.
The book presents images from the rare and top secret Third Army After Action reports and promises to be the first of a series of books covering Patton and his Third Army during WWII.
Patton Hidden in Plain Sight sheds a view onf the General and his world unlike any book. Any Patton enthusiast will obviously treasure this book for the rare photos and staff recollections it shares. Collectors and military vehicles will be pleasantly pleased with the variety of artifacts that illustrate the book as well.—JAG

5.0 out of 5 stars
Will be of great interest for military historians and Patton fans
By C. O’Connoron November 5, 2015

Interesting view of General Patton, presenting many not widely known historical events and published photographs. Will be of great interest for military historians and Patton fans.

5.0 out of 5 stars
A SUPERB VOLUME ON PATTON CONTAINING INFORMATION AND PHOTOS WHICH HAVE RARELY BEEN PUBLISHED!, March 1, 2016
By Earl S. Wolcott

This review is from: Patton Hidden in Plain Sight:The Story of Patton and his Third Army, Hidden in Print for 75 years: The Images Uncovered (Paperback)
I’ve been studying GEN George S. Patton, Jr. for better than 50-years and I’ve read two dozen biographies, but I was amazed at the amount of information and facts I’d never seen before contained in this first volume of a projected three-volume series on Patton. I’ve also collected a number of wartime photographs of Patton and seen many more in pictorial volumes on Patton, but this volume truly contains pictures which were “hidden in plain sight”. All in all, a treasure trove of information for anyone interested in Patton. Well done Denny! 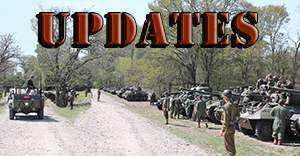 If you would like to help defer some of our costs please consider a donation through Paypal.