What you are about to read is the brief summary of magnificent history of General Patton’s United States Third Army in World War II. When first written, it was classified and labeled as secret. It was written in a brief form from a larger version being written that would be the full Third Army After Action Report. The larger version is called The Official After Action Report of the Third US Army Volume 1 and Volume II After Action Report and is well over 10,000 plus pages with maps and indexes. This smaller summary was written to be distributed to the headquarters units as a way to keep up with the fast moving pace of the 3rd United States Army, in the field. As each campaign concluded, that campaign summery, which had been secret, was declassified for limited distribution. The large After Action Report contained far too much classified information and it remained classified after the war until the early 1980’s. There were only 289 copies of it produced in 1945 and in order to process one you had to have top security clearance. They are quite rare today. General Patton was a historian and he knew the men of Third Army and their loved ones would want a history of what they did. With that in mind, he had a collaboration between his G2 and G3 section commanders and staff and they came up with a smaller condensed history that could be declassified shortly after the fact, as the war waged on. When each campaign was over, General Patton signed the order to declassify each campaign. At the end of the war, on July 7, 1945, General Patton signed the final order to release the Third Army Operational Summaries. They were prepared by Third Army G-3 Historical Sub-Section, printed in the headquarters printing section and distributed to those men who wished a copy. They are very rare as many of them have now been lost to history. However, one was sent home by a young man named “Lawrence” who then wrote a letter home and placed it in the history summery and mailed it. Some 60 plus years later, it surfaced and was sold at auction. It is from the original copy of that summery that you will be reading from. The author of this web site also has one of the very rare original sets of Volume 1 and Volume 2 of the top secret Third Army After Action Reports. It is huge and ways over 50 pounds. They will be part of a larger collection and placed into a book he is writing. Eventually they will make there way to this web site but that is years away.

Notes on understanding. This set of summary histories does not have the individual soldiers names in them and if you are looking for that type of information, this web site will not have it. Those records were lost in a huge fire in the mid-1970’s to the government building that hosed all of the records. We can not help you with that type of information. However, if you know what division the soldier you are looking to find, was assigned to, you might have a “big picture” by reading these summaries. In addition, we have published a Unit Chart of the Corps and divisions that served in Patton’s Third Army from August 1944 to July of 1945. The Corps of Division patches and the corresponding unit designation appears on the chart. We will start the history with that chart. All of the divisions are mention in the chart somewhere within the summaries. Thus you can get some idea as to where a division of corps were during the European campaign, provided they were in Patton’s Third Army. The question that may be running through your head is, “This is great, but can I have a copy of it. ” Our web site has a copy write because we went to all of the trouble to copy the and publish all that is here. However, we love the “great generation” of our fathers and grandfathers. They fought for our freedom and many gave their young lives so you could be free. So free it is and free you shall have it. It has already come with a high price. We do ask that you tell others where you got it, and that you do not charge for it. Note, this does not apply to the whole web site but to this set of summaries only found under the title web pages as “third-army-summary-of-after-action-in-world-war-ii” and proceeding pages only. This is for historical research only. If it winds up on your web site and you try to make a buck off of it, then we reserve the right to enforce all copyrights. 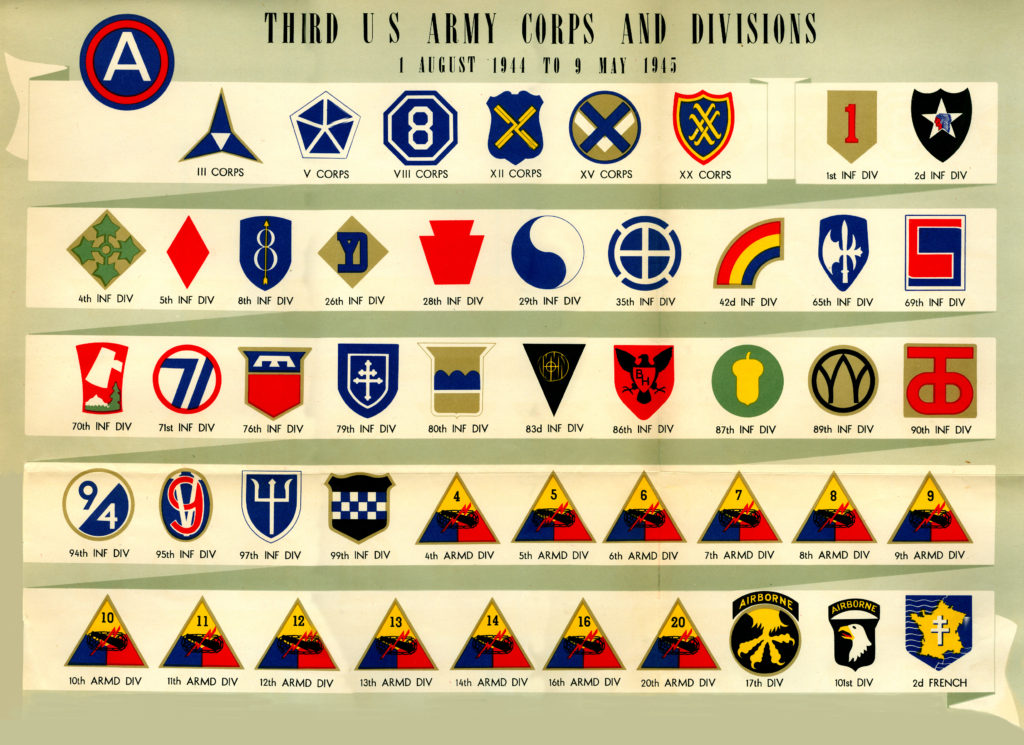 2. These Pamphlets are now declassified and may be mailed from this theater, if accompanied by this letter.

3. The pamphlets are for personal use only and are not to be reproduced.

By Command of General PATTON:

4. The Capture of Koblenze and the Palatine Campaign 13 March-21 March 1945 Forcing the Rhine-Frankfurt on Main-across the Mulde 22 March-21 April 1945

Crossing and entering Czechoslovakia and Austria 22 April -8 May 1945